New Amsterdam Vodka Pink Whitney $17.99
Back to products
Next product

This 18-year-old whisky, which was aged in sherry-seasoned oak casks from Jerez, was awarded a 92-point rating from Wine Enthusiast.

Aroma of toasted oak and ginger, along with notes of raisin, vanilla, and cinnamon. Palate is bursting with orange, spice and clove, as well as toasted oak, and leads to an elegant finish filled with orange zest, ginger and dried fruit.

As a result of a meticulous distilling process and insistence on only the finest ingredients as well as almost two decades spent in hand-picked sherry seasoned oak casks from Jerez, The Macallan 18 Year Old Sherry Oak Single Malt Scotch Whisky delights with an unparalleled depth and complexity. Delivering aromas of toasted oak and ginger, along with notes of raisin, vanilla, and cinnamon on the nose, the palate is bursting with decadent flavors of orange, vanilla, and ginger, mingling with clove and toasted oak, all leading to an elegant finish filled with orange zest, ginger and dried fruit.

Situated on a ridge above the banks of the River Spey, the Easter Elchies House has been the spiritual home of The Macallan for over three centuries. In 1820, Alexander Reid sowed the fields surrounding the rented home with barley and established the first licensed distillery on the estate, which he named Macallan after an ancient church that had been destroyed by fire during the 15th century. In the slow winter days, Reid would ferment and distill his excess grains into whisky, which was often drunk straight from the still or sold to travelers passing through the town.

Today, the Macallan Estate encompasses 370 acres, 95 of which are devoted to the production of the Macallan Estate’s Minstrel barley (a single acre produces about 2.5 tons of barley each year, enough to yield 1,800 bottles of The Macallan). In addition, the distillery contracts with farmers to purchase barley that is low in nitrogen and high in starch, resulting in a rich and oily whisky.

After the harvest, the barley is malted and mashed in one of The Macallan’s two mash tuns, a process that takes between four and eight hours. Then, the barley is fermented with a specially cultured yeast before being distilled twice through The Macallan’s copper-pot stills. The copper comprising the stills acts as a catalyst and enhances the formation of sweet esters while minimizing impurities such as sulfur. In addition, the curiously small stills — some of “the smallest stills within the Scotch whisky industry,” according to production manager Alexander Tweedie — produce a whisky with a heavy, oily flavor.

Following distillation, The Macallan distillers remove the heads and tails of the whisky and collect approximately 16% of the spirit to fill into casks for maturation. This “cut,” which is among the highest of any Scottish distillery, results in a more full-bodied and richer whisky.

The Macallan 18 Year Old Sherry Oak Single Malt Scotch Whisky is aged for nearly two decades in a combination of sherry-seasoned Spanish oak and sherry-seasoned American oak casks. The Macallan takes great care to source, craft, season and care for these casks, as they account for approximately 60% of the final aromas and flavors of the whisky, according to a study commissioned by the distillery.

Macallan 18 is a single malt whisky from the Macallan distillery in Scotland. It is aged 18 years in sherry casks, giving it a deep amber color and rich flavor. The nose is full of dried fruits, chocolate, and spice, while the palate is creamy and sweet with notes of citrus and vanilla. The long finish has a hint of smoke and oak. This complex and well-balanced whisky is perfect for enjoying neat or on the rocks. 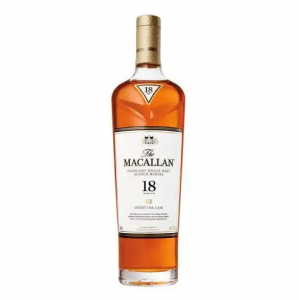 Macallan 18-Year-Old Sherry Oak is a rich and full-bodied whisky with notes of dried fruits, spice, and dark chocolate. The sherry cask influence is evident in the nose and taste and adds a beautiful richness to the whisky. The finish is long and lingering, with just a hint of oak tannins. This is a stunning whisky and one of our favorites. This is the whisky if you’re looking for a unique gift or want to treat yourself. Cheers!

Macallan 18 Yr Sherry Oak Whisky is a premium single malt whisky aged 18 years in oak casks. It has a complex flavor profile with notes of sweet vanilla, rich fruit, and spice. This whisky is best enjoyed neat or on the rocks.

If you’re looking for where to buy Macallan 18 Oak, your best bet is to search online retailers or specialty liquor stores. Prices can vary depending on the retailer, but you can expect to pay around $200 for a 750ml bottle.

When choosing a bottle of Macallan 18 Oak, look for one that has been matured in sherry-seasoned oak casks. This will give the whisky a richer flavor and deeper color. Avoid bottles that have been artificially colored, as this can affect the taste.

If you’re a fan of single-malt Scotch, then you’ve probably heard of the Macallan 18 Sherry Oak. This famous whiskey is made in Scotland and has aged 18 years in sherry casks. The result is a smooth, rich, and flavorful spirit perfect for sipping neat or on the rocks.

So, what do people think of the Macallan 18 Sherry Oak? Overall, reviewers say that this is an excellent Scotch whiskey. The flavor is well-balanced and complex, with oak, cherry, chocolate, and spice notes. It’s smooth and easy to drink, with just a hint of sweetness from the sherry casks. Many reviewers also note that the Macallan 18 Sherry Oak is an excellent value for the price.

If you’re looking for a top-quality single malt Scotch, then the Macallan 18 Sherry Oak is worth checking out. It’s sure to please even the most discerning whiskey lover.